Heading into the last November Bank of England meeting investors were fully pricing in a 15bps hike to 0.25% with a further four 25bps being priced in for 2022. However, in a surprise to rate markets, the Monetary Policy Committee voted by a majority of 7-2 to maintain the Bank Rate at 0.10%. The Committee also voted by a majority of 6-3 for the Bank of England to continue with its existing programme of UK government bond purchases maintaining the target at £875 billion and so the total target stock of asset purchases is at £895 billion.Saunders & Ramsden were the dissenters who were in favour of rate hikes. The rest of the MPC wanted to wait on jobs data before hiking rates and the market will be more cautious from here on in about pricing in Bank of England rate hike signals.

The GBPJPY upside outlook from the last central bank meeting report player out nicely. However, the upside moves have paused as SONIA futures show a quick re-pricing of interest rate expectations. Take a look at the SONIA futures to see the swift re-pricing the market made after the meeting

The Bank of England now hasa market-implied path for the Bank Rate that rises to around 1% by the end of 2022. The BoE state that the UK economy is recovering and that interest rates will need to rise in tore to return inflation to the BoE’s 2% target.

In the near term inflation is set to rise to just under 4% for October of this year. This is mainly due to the impact on utility bills on the past strength in wholesale gas prices.CPI inflation is then expected to rise to 4½% in November and remain around that level through the winter, accounted for by further increases in core goods and food price inflation. Wholesale gas prices have also risen sharply since August. CPI inflation is then expected to peak at around 5% in April 2022, materially higher than expected in the August Report. However, the BoE do expect these pressures to fade: “the upward pressure on CPI inflation is expected to dissipate over time, as supply disruption eases, global demand rebalances, and energy prices stop rising’ and  CPI inflation is projected to fall back materially from the second half of next year (2022)’. The inflation print was up across the board this week as the UK faces pressure to hike rates to control inflation. Yes the outlook is what’s expected by the BoE. However, the pressure is on for the BoE to act. It’s the usual game of cat and mouse…

At the meeting prior to this one the end of the furlough scheme was a key focus. The BoE were once again stressing uncertainties surrounding the outlook for the labour market, and the extent to which domestic cost and price pressures persist into the medium term. UK labour data out this week has shown a positive surprise with 247K jobs added vs only 185K expected. The unemployment rate was good at 4.3% vs 4.4% expected and UK average earnings were higher. This should give the Bank of England reassurance that a December rate hike would be appropriate.

Despite the sudden shock in rates futures markets the Bank of England is still expecting to raise interest rates to 1% in 2022. This keeps a weak bullish bias for the GBP. Wage and inflation data tick the BoE’s boxes, so a December rate hike is now being expected. Just remember that the BoE is not necessarily reliable with their communication. Brexit risk remains a tail risk as the UK may trigger article 16 and that could suddenly weigh on the GBP.

You can read the the full statement here.

This is interesting as the SNB is showing signs of growing impatience with the strong CHF. The SNB interest rates remain the world’s lowest at-0.75%. This is due to the highly valued franc (CHF) which has seen signifiant gains over the last few years due to safe haven demand.

The SNB want a lower CHF

At their latest meeting they repeated their willingness to intervene in the FX market in order to counter upward pressure on the Swiss franc. However, at this last meeting the SNB were explicit about the highly valued franc. Previously they had said that they were willing to intervene ‘as necessary while taking the overall currency situation into consideration’. The shift underscores that the SNB hates a strong CHF and their patience is fractionally thinner. It’s probably been the Evergrande crisis spooking investors into the CHF that has peaked their attention. As an aside see here for an interview I did on the Evergrande crisis if you would like a refresher/primer. As an export driven economy they hate a strong CHF and are doing their best to make it as unattractive as possible. The market generally ignores this and keeps buying CHF on risk aversion which has been here in one form or another since around 2008/2009. Also, note that their trade surplus is high, boosting the CHF.I guess all this pent up savings are going into Swiss watches. I was actually tempted myself recently, but decided that I prefer my Irish freckly arm. It is hard to be stylish and have an Irish complexion. I guess the leprechaun look have their place, but I don’t see many of them wearing Swiss watches. I also look a little like Bill Gates, so that’s as far as my fashion looks goes,

The bottom line and the EURCHF ‘opportunity’

The SNB will continue to intervene in the FX markets. The Swiss are always mindful of the EURCHF exchange rate because a strong CHF hurts the Swiss export economy. This is why there has been a shift in language about countering ‘upward pressure on the Swiss Franc’. The SNB want a weaker CHF. The rest of the world wants CHF as a place of safety in a crisis, so we have this constant tug of war going on.

The SNB are still content to be the lowest of the central bank pack and dissuade would be investors by charging them for holding CHF. EURCHF for a 6-12 month hold is still worth considering, if not even more so now with the SNB’s patience wearing thin with a strong CHF. The problem with this trade idea is the timing. Get a turn around out of Europe and one to jump on. Personally I have tried to enter this twice now and I am still fighting CHF strength. So, just use the key tech, low leverage, and wide stops if you want to play this via FX. For a better option consider a EURCHF option ratio call as pointed out by one of our long time readers. It is not an instrument I have traded before, but you can read more in the comments here. 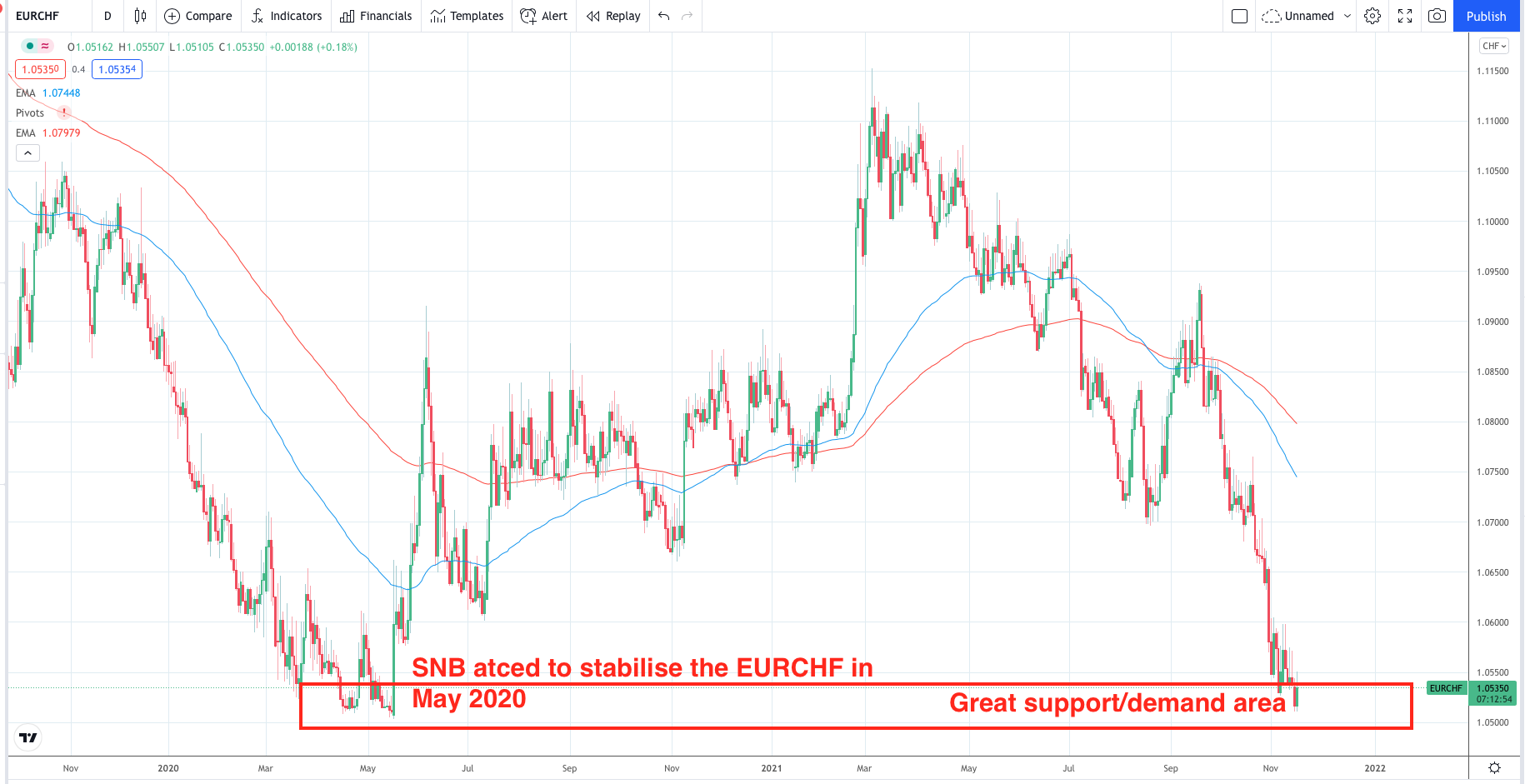 The Bank of Japan still remains a very bearish bank and there is no sign of it exiting from its easy monetary policy.Once again the latest meeting saw no surprises and everything was as expected. Interest rates remain at -0.10%. The Yield Curve Control (YCC) was maintained to target 10 year JGB yields at around 0.0%. The vote on YCC was made by 8-1 votes. The only dissenter was once again Mr Katoaka. The BoJ expect current rates to stay at present, or at lower levels.

Was JPY weakness a worry to the BoJ? No.

However, the BoJ had no concerns and the weakness was seen as a normal move by Governor Kuroda. He said the move was within the range of current fundamentals and had only weakened a small amount. The weak JPY makes imports expensive, but the exports become cheaper. No complaints there then from the BoJ.

For years Japan has struggled to see any inflation, so with inflation rising around the world it was interesting to see that the BoJ now do expect consumer inflation to rise,. However, not by much and the latest inflation metrics for this year were lower than expected .Core CPI was down to 0.0% vs 0.6% expected and GDP growth was down as well to 3.4% vs 3.8% previous. However, the 2022 forecast for inflation is 0.9% and 1.0% for 2023. This is reflecting that Japan wholesale inflation hit a 13-year high (which puts a squeeze on industry profits) as the BoJ expect costlier input prices to be passed on to consumers.

The USDJPY symmetrical triangle breakout from the last central bank report turned out nicely helped by the JGB yield curve control as the US10 years broke higher post the September Fed meeting. The outlook is now different, but with no inflation worries for the BoJ and no fears over the weak JPY the JPY can remain a funding currency and is a great currency to pair with currencies set to raise rates. Is the carry trade back? It certainly could be, so don’t miss out on the JPY weakness as it is likely to remain an ongoing theme.

This October 06 meeting saw the anticipated rate hike by 25 bps to 0.50%. If you remember the previous meeting saw a resurgence of COVID-19 just before the rate decision and this led to the RBNZ holding rates. However, the situation for New Zealand is that their smaller economy leaves them more vulnerable to a surging housing market. On top of this theist inflation reading prior to the decision was at 3.3% y/y. This is the highest reading in 19 quarters.

It was this rising inflation that has caught the RBNZ’s attention. The RBNZ were explicit about rising inflation pressures, ‘cost pressures are becoming more persistent’. This recognition of rising inflation is significant. For many week central banks have been happy to consider inflation as transitory. It was at this meeting that it seems the inflation problem really starts to bite. The problem central banks will have is how to fix supply chain problems that cause inflation without hindering growth? It is like trying to square a circle.

At the previous meeting the RBNZ had to decide which pressure they would react to; Covid or a hot economy. They reacted to both by not hiking rates and kept them uchanged at 0.25%. However at the same time they saw see the OCR rising by one rate hike this year and 100bps next.

So, at this latest meeting we saw the one rate hike that was expected. all this was a classic ‘buy the rumour, sell the fact response‘. The hike was expected, so price rallied sharply higher on the announcement, before selling off. See the chart below. 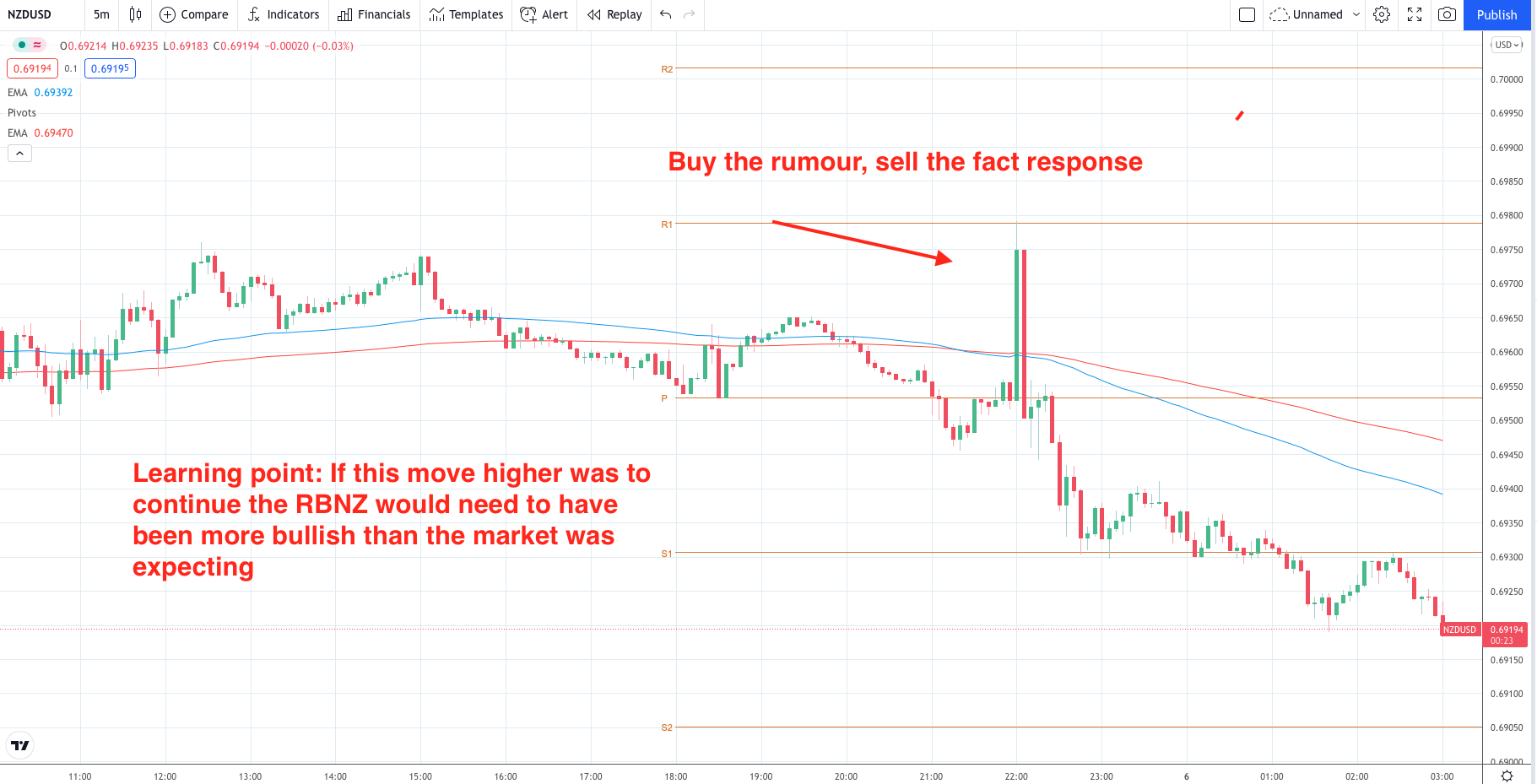 The RBNZ meet this week and the OiS futures are pricing in a 100% chance of a 25bps rate hike. Some analysts also see a chance of a 50bps rate hike. This should keep the NZD bid into next week. If we see yields dropping lower than a NZDUSD long at the start of the week makes sense for a move higher in a ‘buy the rumour’ fashion. Just watch out for the selling of the fact. However, remember that RBNZ Deputy Governor Hawkesby said in October the RBNZ would be hiking rates by 25bps, not 50bps, at meetings due to the heightened uncertainty. Has this now changed with New Zealand withdrawing lockdown restrictions by the end of this month?

The RBNZ want to keep options open and react as the economy reacts: The Committee noted that further removal of monetary policy stimulus is expected over time, with future moves contingent on the medium-term outlook for inflation and employment. Well, we know inflation is likely to keep rising and the RBNZ expect CPI to rise above 4% in the short term. Surely, inflation will be taking centre stage for the RBNZ moving forward and most traction for NZD direction is most likely to come from this quarter.

Ok folks, enjoy the rest of the weekend!

Stock selling intensifies into the close