GBP/USD is slipping lower as the US Dollar firms on persistent speculation that the Federal Reserve will soon begin debating whether to withdraw some of its monetary stimulus for the US economy – although an actual tapering remains far away.

As the chart below shows, GBP/USD is sitting on support from both near-term and slightly longer-term trendlines that currently check in around 1.4120 as well as moving average and round-number support at 1.41. Note, though, that a further slide to below further trendline support at 1.3950 would be needed before the outlook turns bearish longer term. 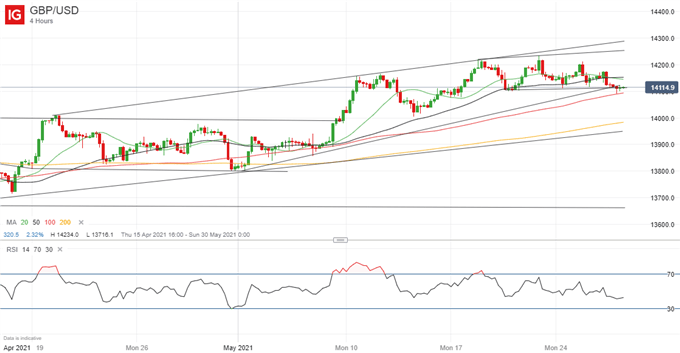 On a light day for data, interest in the UK will focus on Matt Hancock, the Health Secretary, who will appear before Members of Parliament. That follows testimony Wednesday by the Prime Minister’s former chief adviser, Dominic Cummings, who was highly critical of him.

As for the US Dollar, traders will need to watch out for any hints that the Fed is closer to winding back its stimulus measures even though officials continue to insist that a tapering remains far down the road, that inflation remains subdued, that it is too early to even discuss withdrawing stimulus and that an actual interest rate increase is even further away.

Any such hints would likely give USD a further boost at the expense of currencies like the Pound, the Euro and the Australian Dollar.

RBNZ rate hikes ahead appear locked in, now the question is when and how many?