In FX markets, the cyclically-sensitive AUD and NZD outperformed their major counterparts, while CAD and JPY came under pressure. Gold prices jumped just over 0.5% per troy ounce, as yields on US 10-year Treasuries slid 1 basis point lower. Looking ahead, a slew of PMI figures out of Europe and the US headline the economic docket. 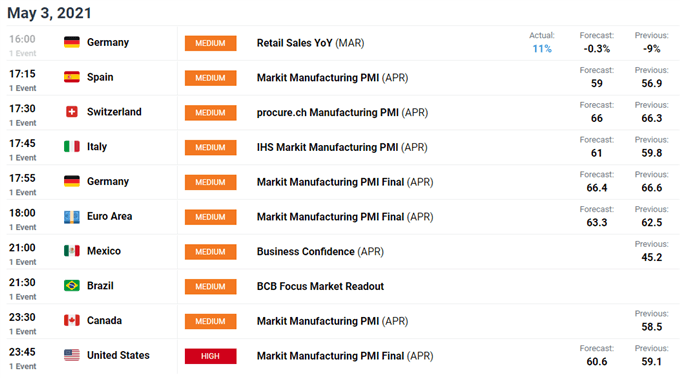 The US Dollar may continue to climb higher in the coming weeks, on the back of robust jobs figures and seasonal dynamics. The upcoming non-farm payrolls report could intensify Federal Reserve tapering bets, which appear to have been re-invigorated by a larger-than-expected Q1 GDP print.

The local economy is expected to add in excess of a million jobs in April, building on a 916,000 increase in payrolls in March. ISM PMI figures are also forecast to be robust, with the manufacturing sector penned to record its largest expansion in 37 years, while the services sector is estimated to expand at the fastest pace on record.

Seasonal dynamics may also buoy the haven-associated Greenback in the near term, as the adage “sell-in May and go away” begins to ring in market participants ears. With that in mind, a more extensive corrective rally could be on the table for the US Dollar, if market sentiment sours in the week ahead. 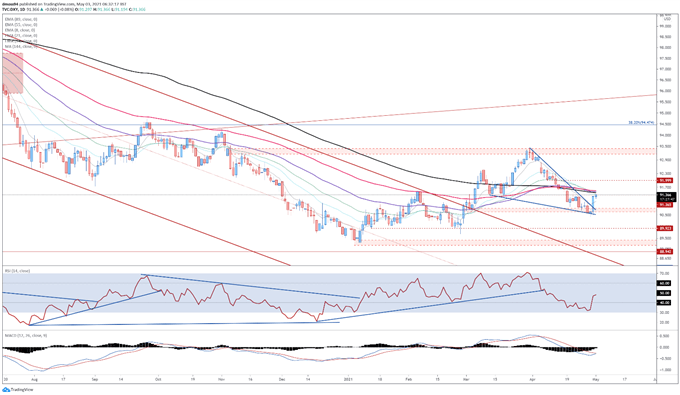 From a technical perspective, the US Dollar Index (DXY) looks poised to extend recent gains, after the formation of a Bullish Engulfing candle validated the topside break of a bullish Falling Wedge pattern.

With a bullish crossover on the MACD indicator in play, and the RSI eyeing a push above its neutral midpoint, the path of least resistance seems higher.

A daily close above the 89-EMA (91.56) probably validates bullish potential and opens the door for buyers to drive the index back towards range resistance at 93.20 – 93.40.