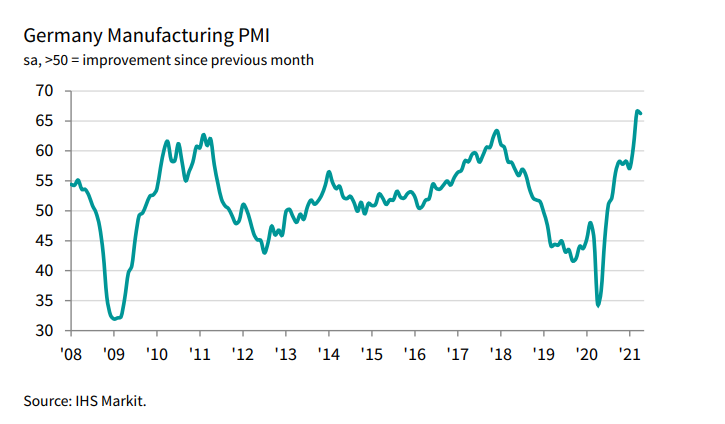 The preliminary report can be found here. Little change to the initial estimate as German manufacturing activity continues to keep more robust in April after a record high seen in March, with new orders and output staying solid.

That said, supply disruptions continue to have a significant impact as input cost and output cost inflation are marked higher once again – the latter rising to a record high. That will eventually feed into price pressures and consumer inflation in general.

“The PMI continues to send positive signals for the health of the
German manufacturing sector, with the headline index holding
close to March’s record high thanks in large part to sustained
strong growth in new orders.

“A second consecutive record increase in backlogs of work underlines
the strength of demand faced by German manufacturers, but it
also highlights the fact that production continues to lag behind
new orders. The data show that goods producers have redoubled
efforts to expand capacity, with April seeing a notable acceleration
in the rate of job creation to the fastest in more than two-and-a-half years, but supply issues remain a risk to the sector’s growth
prospects.

“The reports of delays in the receipt of inputs over the past two
months are without precedent, and the severe imbalance of
supply and demand for raw materials, components and freight
has pushed up the rate of input cost inflation to near-record levels.
Supportive demand conditions mean we’re increasingly seeing
manufacturers raising factory gate charges, but prices can only be
increased so far before we start to see some impact on demand.

“Despite showing some concerns for the current supply issues,
manufacturers generally maintain a strongly positive outlook for
the year ahead with expectations at a record high, hinting they
believe the bottlenecks to be transitory and that conditions on
both the demand and supply side will get better.”