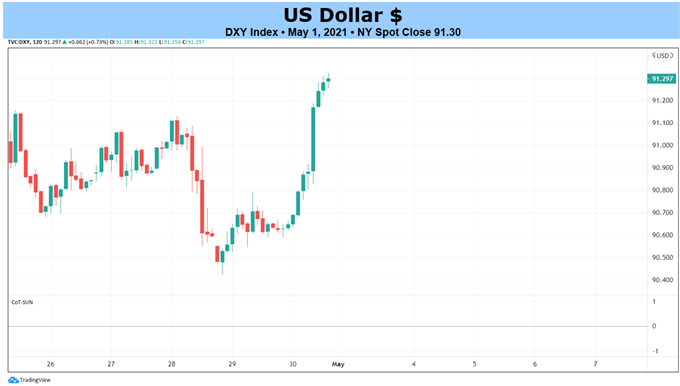 Fundamental Forecast for the US Dollar: Neutral

US Dollar Stumbles into May

The US Dollar (via the DXY Index) was able to turn higher at the end of the week perhaps thanks due to end-of-month rebalancing flows. It was much needed relief for the DXY Index, which otherwise closed the month of April down by -2.08% – surpassing average seasonal trends over the past 5- and 10-years. With US economic data outperforming and commodity prices on higher, there has been a rise in both US nominal yields (Treasuries) and inflation expectations (breakevens).

In a sense, the rise in US Treasury yields has been a ‘false flag,’ seeing how the emergence of deeper negative real US yields in 2020 went hand-in-hand with a weaker US Dollar. The backdrop that facilitated those US Dollar losses at the end of 2020 appears poised to remain in place for the foreseeable future.

Staying on the Narrow Path

Federal Reserve policymakers met this past week for their April meeting, and there quite possibly couldn’t have been a more mundane market reaction. But that’s a good thing as far as the FOMC is concerned, insofar as little if no volatility around their meetings and Fed Chair Jerome Powell’s press conferences means that, in effect, policy is priced-in; markets still believe that the Fed has its hands on the proverbial wheel. 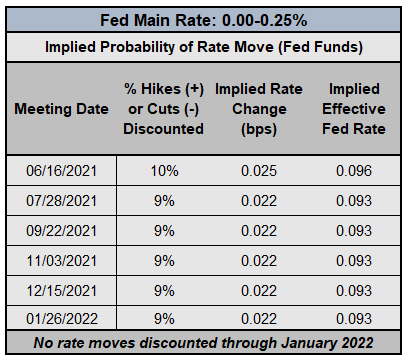 Fed policymakers have been extremely disciplined with their messaging in recent weeks, on and around the April Fed meeting in particular; there has been a clear, resolute drumbeat that interest rates will remain low so long as the US economy remains at risk to the coronavirus pandemic. As has been the cast for weeks, Fed funds futures are pricing in less than a 10% chance of a change in Fed rates through January 2022. Curiously, with only a slight hint about inflation pressures not being just transitory – Fed Chair Powell called them “largely transitory,” to nitpick – US Treasury yields have started to rise anew. 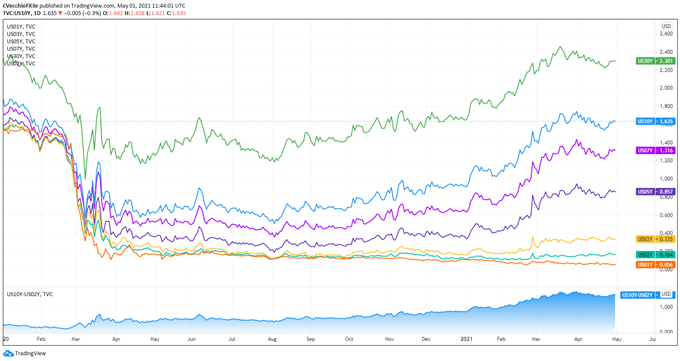 The recent rise in US Treasury yields has not translated into a stronger US Dollar, however, and for good reason: increasing inflation pressures, as measured by the 5- and 10-year breakeven rates. As the Federal Reserve signaled this week at its April policy meeting, the plan is to keep the main rate low for the foreseeable future. Accordingly, with grains like corn and wheat and metals like copper experiencing rapid recent price appreciations, rising near-term inflation expectations may continue to outpace gains in US Treasury yields. US Treasury yields are nominal, and inflation expectations outpacing yields means downward pressure on real US yields may appear again.

US Economic Calendar Loaded with Risk

The first week of May brings what may be considered a cornucopia of event risk for the US Dollar. The economic calendar is supersaturated with event risk, likely giving traders plenty of opportunities to catch bouts of volatility in USD-pairs over the coming days after a quieter (though persistently negative) month of April:

Based on the data received thus far about 2Q’21 – which, admittedly, is not that much – the Atlanta Fed GDPNow’s initial forecast for the quarter is looking for growth at +10.4% annualized. According to the Atlanta Fed, “the initial estimate of first-quarter real GDP growth released by the U.S. Bureau of Economic Analysis on April 29 was 6.4%, –1.5% below the final GDPNow model nowcast released on April 28.” The next update will be released on Monday, May 3 after the April US ISM manufacturing index and the April US construction spending data. 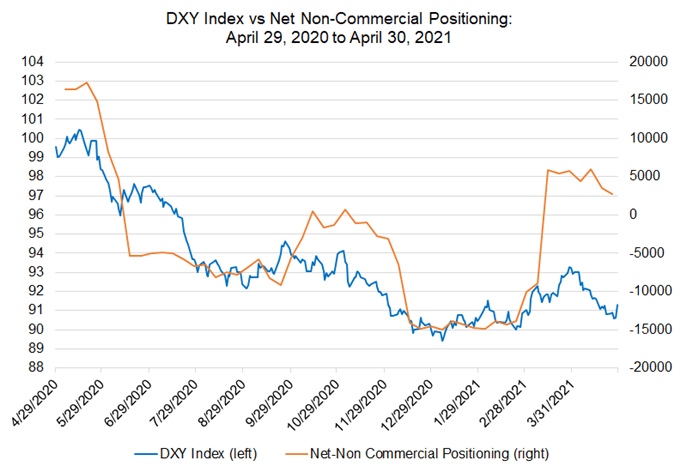 Finally, looking at positioning, according to the CFTC’s COT for the week ended April 26, speculators slightly decreased their minor net-long US Dollar positions to 2,746 contracts, down from 3,518 contracts held in the week prior. US Dollar positioning is the closest to being exactly neutral for the first time since October 2020. Perhaps more interesting is the fact that the last time the futures market was at similar positioning levels, the DXY Index was trading closer to 96.00 (closed April at 91.30).

EURUSD trades down to a low value area. What next?