TSLA On talk of autonomous vehicle tech, no meme stock has been in focus longer than Tesla (TSLA). Some call it a cult stock rather than a meme stock (if there is a difference). Tesla stock has risen over 700% since January 2020. A 5 for 1 stock split in August 2020 helped keep the share price at a more accessible level while also reducing attention from Tesla’s absurd share price appreciation. 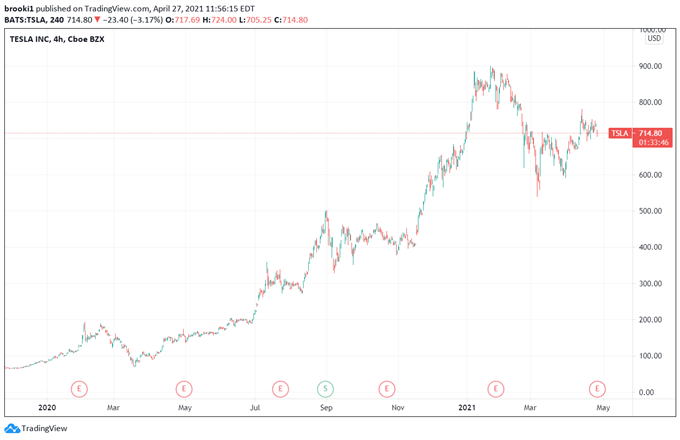 CEO Elon Musk welcomes and encourages the memes surrounding his company, taking to Twitter to engage in banter, hype up Tesla, and share his bullish views on cryptocurrencies. The company’s recent investment in Bitcoin also appeals to retail traders – big time. Tesla announced solid earnings for Q1 2021. In fact, $101 million of the $438 million in net income the company reported came from its sale of some of the bitcoin holdings acquired earlier in the year. Tesla’s CFO said the sale was essential to prove bitcoin’s liquidity. Given Musk’s level of involvement and Tesla’s cult-like following, it is one of the world’s best performing meme stocks. And given Musk’s ability to produce the bulk of Tesla’s Q1 net profits from carbon credits and Bitcoin gains, he’s certainly given the internet a focal point for many of these recent market themes.

Our own Rich Dvorak touched on that most recent earnings release from Tesla, and the stock has remained on its back foot since the Monday announcement. After hitting a high around $750 on Monday the stock has now dropped down to $670 as of this writing, a fall of more than 10%.

There is, however, a case to be made for some continued bullish behavior, especially upon examination of bigger picture charts as price action remains above a longer-term bullish trendline. The early-year flare up to $900 illustrates the retail enthusiasm behind meme stocks very well; but as we’ll see in the coming pages that attention began to veer onto other stocks such as GameStop and AMC.

How’s this for a wild-ass rumour to end the week?