The Federal Reserve released their minutes from the March 17 meeting. The 13 page document was consistent in most of the commentary since the rate decision. The Fed will require some time for it to make substantial progress toward its goals of full employment and 2% inflation. The central bank expects inflation to rise in the short term due to year on year effects and bottlenecks in the supply chain, but will view the gains as transitory despite what is expected to be above trend growth of 6.5% in 2021.  They continue to view the coronavirus as a risk especially the variants.

There were a number of Fed speakers today as well. Fed’s Kaplan said the economy is not out of the pandemic woods, that stimulation should therefore remain, but would be in favor of tapering QE when the economy meets the Fed’s goals.  Fed’s Evans that “substantial further progress will not be met for a while” and that the Fed should “only be concerned if inflation becomes bothersome”.  He also took a page from Chair Powells book of quotes by saying “it is too early to start talking about, talking about a QE taper”. Fed’s Daly put a time term to Fed action by saying “It will take a year or two for inflation to get to 2% sustainably”.   Lael Brainard said the economy has brightened considerably, but it will take “some time before realized outcomes on inflation and employment are achieved”.

All are consistent with Fed minutes.   It will take time. The Fed will be patient.

In data today, the US trade deficit was the largest on record as the US economy is still importing more than weakening exports to slower growth companies.  The US consumer credit showed an opening of the consumers wallets after the last 10 of 11 months showed negative revolving credit as consumers cut credit card debt.  As the Covid situation gets better and employment increases, so too will confidence to spend.

In the markets today:

In the US debt market yields in the longer and are ending the day higher after three straight days of the declines. The 10 year yield has moved down from 1.77% to a low of 1.626% today:

In the forex market today, the CHF is the strongest of the majors followed by the US dollar. The NZD and AUD were the weakest. 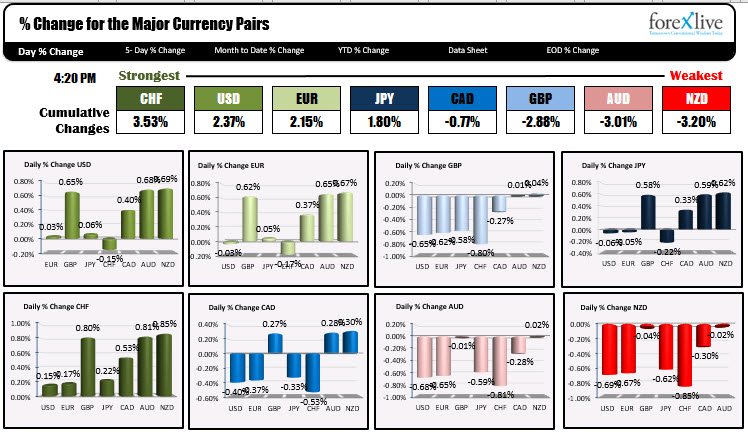 The US stock market’s all more of a rotation out of the riskier  low cap stocks ,and into the large cap growth stocks.  Some of the big winners included:

Overall the indices were mixed with the the Dow and S&P of marginally (the S&P did eke out a all-time record close by less than 2-points). The NASDAQ index fell marginally (by -0.07%).  That index as a client for the second consecutive day but yesterday’s decline was only -0.5%. So there is not a lot of value lost in the 2-day decline.