In early February, the Euro breached support which had confined its losses against the British Pound back to mid-May 2020. That opened the door for a deep selloff that brought the EUR/GBP exchange rate to levels unseen in over a year. The trend looks likely to continue in the months ahead.

The fundamental backdrop seems to be shaped most acutely by the divergent paths taken by the UK and Eurozone on the Covid-19 pandemic. While the UK was relatively early to launch a spirited vaccination effort and cases of the virus have dropped sharply, the EU dragged its feet. In fact, France, Germany and Italy faced another viral wave in the close of the first quarter.

That has understandably shaped speculation about follow-on monetary policy divergence. The Bank of England seems all but certain to lead the European Central Bank in reining in crisis-inspired easing. Not surprisingly, the EUR/GBP drop has been echoed by a widening bond yield gap in favor of Gilts relative to the benchmark German equivalents, Bunds. 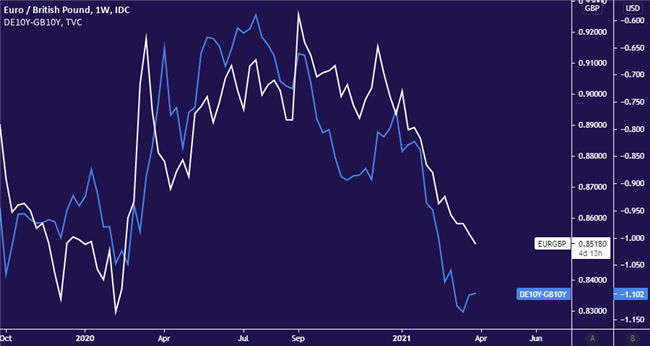 In fact, the ECB was already on softer footing than the BOE before the pandemic entered the picture. It pulled lending rates into negative territory and launched various nonstandard easing measures – including QE and TLTRO bank liquidity injections – well before the virus struck. The underlying issues there remain even if Covid management were to radically improve.

The removal of Brexit risk as a headwind for Sterling is likewise helpful. A last-minute deal was struck just as the calendar turned to 2021, untying the BOE’s hands to some extent. The central bank was leery of tightening in the presence of acute political risk. It is now likely to be more responsive as lockdowns ease and economic activity ramps up.

Technically, prices are testing the swing low support at 0.8540 following a brief consolidative pause. Confirming a breach below this barrier looks likely to open the door for the next significant leg in the EUR/GBP decline, with the next major support level to be tested thereafter appearing in the 0.8277-8282 zone. 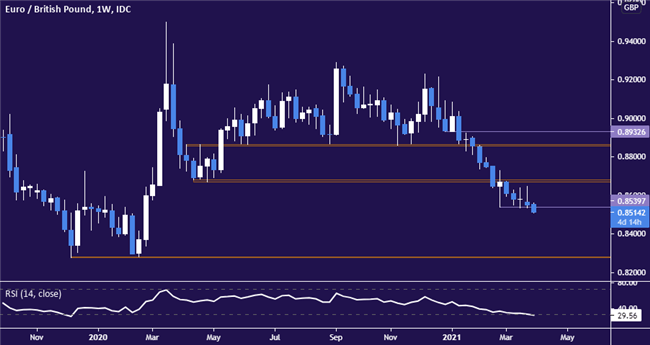 USD/MXN: Peso to appreciate in the near-term before reversing back lower – MUFG