Short EUR/NOK: Norway – Raising Interest Rates in the Latter Half of the Year

Raising rates, two words that haven’t been heard in developed economies for years but according to the head of Norway’s Central Bank – Norges Bank – that is very likely to happen in the second half of 2021. The Monetary Policy Assessment in late March highlighted that while the outlook remains uncertain, clouded by the Covid-19 pandemic, there is likely to be a faster economic upturn than recently projected. That comes with inflation holding above target, boosted by an impressive rally in oil and gas prices. A stronger Krone will weigh down on inflation and if price pressures continue to run hot, a rate hike may be put in place sooner rather than later.

On the other side of this currency pair, the Euro is struggling and the single currency is set to weaken further. Inflation remains below the ECB’s target and is likely to remain there for many, many months. Any economic recovery in the single-block is being held back by a third wave of covid-19 hitting large swathes of Europe, initiating new, and extending old lockdown measures. With a vaccination program seen by many to be faulty and not yet fit for purpose, the Euro will not be getting a boost from a strong pick-up in economic activity in the coming months.

EUR/NOK is now testing the longer-dated simple moving average on the weekly chart. This is situated just under the recent double-bottom around the 10.000 level. A confirmed break and open below here would open the way to 9.8158 and the longer-term target of 9.3862; while resistance on the weekly chart is at 10.420 with a further double-top around 10.500. 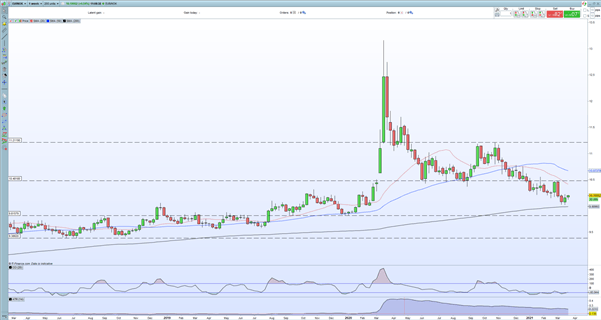 Australian dollar drifting ahead of US CPI