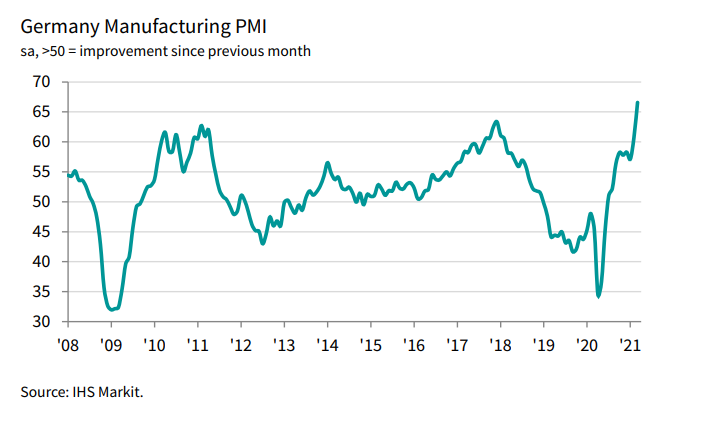 The preliminary report can be found here. No change to the initial estimates as this reaffirms a record growth in output and new orders in the German manufacturing sector, though worsening supply delays are putting further upwards pressure on prices.

“The German Manufacturing PMI marked its 25th anniversary
in March with a record-high reading of 66.6, showing the
goods-producing sector going from strength to strength.

“It was a record-breaking month on many fronts including
new export orders, which have benefited from synchronised
upturns in sales to the US and China and seen an
unprecedented number of German manufacturers reporting
growth.

“However, the Suez Canal blockage could not have come
at a worse time, with more than three-quarters of German
manufacturers already reporting increasing lead times
on inputs in March, with the potential for those numbers to
increase further given the backlog of containers it created
and the anticipated congestion at ports in the coming days
and weeks.

“We eagerly await the April flash PMI data to see the impact
it will have, including on output prices, which were already
rising more quickly than ever before in the series history due
to a combination of acute cost pressures and an unabating
upturn in demand.”

United States Wholesale Inventories declined to 0.8% in April from previous 1.3%