For all market-moving economic data and events, see the DailyFX Calendar.

Archegos Capital Management, a US-based hedge fund, has been forced to sell large blocks of equity positions to meet mounting margin calls with several lenders. Two of the banks who provided prime broking services to Archegos, Credit Suisse and Nomura, have both warned of significant losses, sending their share prices tumbling. Prime brokers offer customers a range of services, including securities lending, financing and clearing.

In London trade, Credit Suisse shares slumped by 16% to a multi-month low, while Nomura closed the Asia session also around 16% lower. Both lenders are warning of significant losses after Archegos defaulted on margin calls, according to several market reports. Credit Suisse is speculated to have lost between $3bn and $4bn and Nomura in the region of $2bn. Several other lenders to Archegos, including Goldman Sachs and Deutsche Bank have said that the fall-out from the hedge fund’s default would not have a significant impact on their earnings.

Archegos Capital Management is run by ex-Tiger Fund alumni Bill Hwang and invests in technology, media and telecom stocks. According to a report in The Financial Times, Archegos may have been trading with Nomura on leverage ‘at least four times’ the amount that normal long/short equity funds would normally get.

On Friday, rumors began swirling around the market that Goldman Sachs was offering a block of 30 million ViacomCBS (VIAC) shares, while Morgan Stanley was said to hawking around a block of 15 million Discovery (DISCA) shares. Archegos Capital Management was a known shareholder in both companies. Both ViacomCBS and Discovery shares ended Friday over 27% lower. It is not yet known if all the lenders have fully unwound their exposure to Archegos yet. Earlier last week ViacomCBS announced a $3bn equity sale, that began trading on March 24, heaping pressure on the equity that had been one of the star performers in the S&P 500 this year. 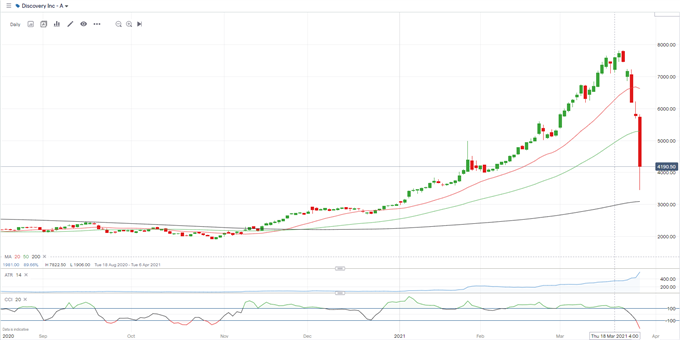 Both charts via @IG.com