How to Trade Gold

Gold prices have been trading in a narrow range since they marked a 9-month low on the 8th of March, with attempts to push higher being weakened by growing interest around bond yields, which is, in turn, keeping the US Dollar supported around 4-month highs. The optimistic US economic outlook portrayed by Fed chair Jerome Powell and US Secretary Janet Yellen during their testimony to Congress is also underpinning USD performance. 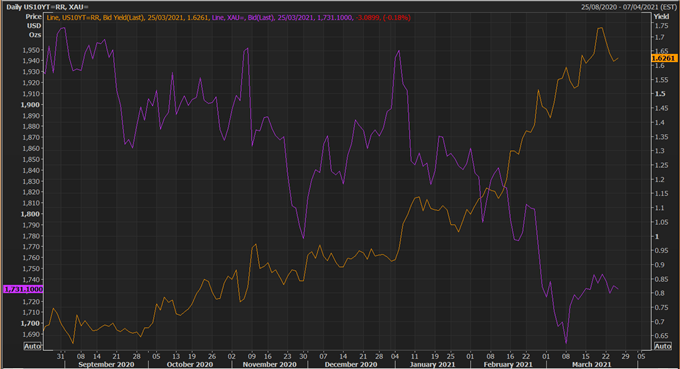 But growing concerns about a possible third wave of Covid-19 are appealing to gold’s safe-haven properties and are allowing XAU/USD to drift higher, albeit with significant resistance. There is also cause for concern with regards to the vaccination rates in Europe and many underdeveloped countries, which are moving at a much slower pace than in the US or the UK, which means that economic recovery may be subdued until the slower paced countries are able to take control of the spread of the virus, allowing for international travel to resume.

The narrow trading over the last few weeks is likely to show that momentum has been building for a break in either direction. It could be that XAU/USD is in a bearish continuation pattern whereby the sideways consolidation marks a brief pause in the trend. This would be reinforced by the fact that the commodity has been unable to find enough support to push above the 1,750/55 area in the last week or so. It is also likely that further resistance will arise at the 50% Fibonacci retracement (1,762) if buyers are able to push higher, so the path higher seems pretty foggy at this point.

Alternatively, this sideways consolidation could mean that buyers are gathering momentum to attempt a new break higher, at which point I would like to see XAU/USD above 1,770 in order to consider that a price reversal is in play. Immediate support can be seen at the 20-day SMA at 1,734, which has halted bearish pressure in the last 3 sessions, followed by the 1,700 horizontal line, where sellers suffered a rejection two weeks ago.

AUD/USD struggles to stay above 0.7400 as USD rebounds

US dollar consolidates as bulls take a breather