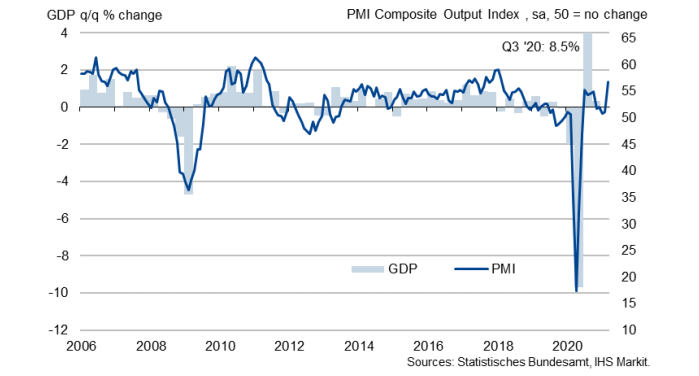 This is quite a stellar report, all things considered, with the headline reading jumping to its highest level in 37 months. Meanwhile, the services sector also shows a marked improvement despite lockdown measures being in place in Germany.

The details show that the jump in manufacturing activity was driven by a record high in the manufacturing output index, reflecting higher production levels alongside growing order books – a solid sign of demand conditions returning.

The only downside is that cost inflation has jumped up a little, as expected during this period – which should translate to consumer inflation eventually.

“The ‘flash’ PMI pointed to a notable upturn in
German business activity in March, with the data
therefore hinting at the prospect of a better-than-expected economic performance in the first quarter.
The result owed to a combination of survey record
growth in manufacturing output and a better
performance from services, where some firms
benefitted from the slight easing of lockdown
restrictions.

“The sustained upturn in the factory sector has
seen the manufacturing PMI reach unprecedented
heights, with growth in global demand for German
goods showing no signs of abating and businesses
reporting that previously-delayed investments are
now being realised. On the flip side, however,
supply chains are coming under increased pressure
from the upturn in the manufacturing sector, which
is pushing up factory input costs at one of the
quickest rates in nearly 25 years of data collection.

“We’re also seeing price pressures increasingly
emerging in the service sector, with average
charges for goods and services now rising at the
fastest rate for two years. Adding to the inflationary
story was an acceleration in the rate of employment
growth, as manufacturers finally signalled a return
to job creation after a long period of retrenchment.

“Businesses remain highly optimistic about the
outlook over the coming year, with many pinning
their hopes on progress in the vaccine rollout.
However, with the “emergency brake” restrictions
coming into effect in April to stem a third wave of
infections, the immediate outlook looks less
promising.”

US stocks open with declines in the major indices