As Bitcoin has continued to grow in popularity and size, the network’s ecosystem has also continued to multiply. Bitcoin has led the charge in the entrance of institutional cash into cryptocurrency, as well as the development of regulatory and tech infrastructure for crypto.

It’s grown so quickly that it’s almost easy to forget that just a few short years ago, Bitcoin was facing an identity crisis so powerful that much of the world was confused about which coin was the real Bitcoin. (Remember BCH?)

Of course, the Bitcoin v. Bitcoin Cash crisis is firmly in Bitcoin’s rear-view mirror. However, the underlying problems in Bitcoin’s governance that caused the crisis in the first place haven’t changed. While this isn’t a serious issue for Bitcoin at the moment, Bitcoin could face governance issues on the road ahead.

Finance Magnates recently sat down with Jake Yocom-Piatt to speak about governance on Bitcoin and on Decred (DCR), the cryptocurrency that he helped to create. Jake is currently the Project Lead of the Decred cryptocurrency project, as well as the chief executive of Company 0, LLC, one of the corporate contractors that works for Decred.

We also spoke about Decred’s evolution, and about how blockchain can bring transparency to government elections. Check it out.

[embedded content]
This is an excerpt that has been edited for clarity and length. To hear Finance Magnates’ full interview with Jake Yocom-Piatt, visit us on Soundcloud or Youtube.

The birth of Decred

“I’ve been working in the cryptocurrency space since late 2012, early 2013,” Jake said. “My background started with Bitcoin, which was the ‘soup du jour’ at the time. That really caught my eye, and so I started working on it–I thought it was very interesting to be able to store and transfer value out of the fiat banking system.”

Jake’s first serious endeavor in the crypto space was “an alternative full-node Bitcoin implementation called BTCSuite. The intention was to make the Bitcoin ecosystem more diverse, more stable, and more secure.” The project was primarily funded internally funded: “I’d spent a couple of million dollars doing that, but it became a financing game. I could only do that for so long before eventually, I had to get external investments.”

“That didn’t really appeal to me, so I decided to create a cryptocurrency with people that I knew,” he explained.

As such, Decred was born. Jake said that the inspiration behind the coin came from “the frustrations that I had with [his] Bitcoin experiences.”

“Bitcoin’s obviously a very interesting piece of technology, and it really changes the game–this idea that you don’t have a central point of trust that determines that the outcome of how value storage and transfer works was very interesting to me.”

However, “there were a couple of major issues that I saw” after several years of working in the space.

The first of these issues had to do with power and control. “Who’s really in charge of the network?”, he said.

“With Bitcoin, it’s the core developers, and a handful of ‘economic nodes’–big, venture-capital-backed outfits that build the infrastructure around it,” he said. “That was an issue to me–shouldn’t the people who actually hold the Bitcoin be in control of the network, rather than a small group of miners, venture capitalists, and developers?” This is why Decred’s Proof-of-Stake element was introduced.

In addition to the centralization of power and control on the Bitcoin network, Jake said that he also found frustration with the funding model for technological development.

Indeed, the question of who’s going to pay for Bitcoin’s technical infrastructure is “a very open question to me,” he said. This is why (on Decred’s network), “10 percent of every block subsidy goes into a treasury account, and then we use that treasury account for the work that’s being done on the project. That allows us to get away from this model, where you have to have wealthy benefactors or venture capitalists and invest into someone who’s doing infrastructure work, so that the network–in effect–is investing in itself.”

“The other thing I noticed was that Bitcoin, while it is a great piece of technology, had stagnation issues–it would get stuck in ‘everyone’s arguing about block size’–the whole thing practically ground to a halt because of people arguing about block size.” As a result, Decred introduced a governance system in which people can vote on proposals with the coins that they’ve staked.

So far, it seems that Decred’s efforts to build a better cryptocurrency network seem to be paying off.

“When we launched back in February of 2016, we had the expectation that our coin would be worth, I don’t know, $0.50. Then we were like, ‘man, it would be so cool if it was worth a few dollars,’ maybe ten dollars, or whatever. Over time, it’s like, wow–this thing went gangbusters.”

PlusMarkets Review – Is the Multi-Asset Brokerage the Right Option for You?Go to article >>

Data from Coinmarketcap shows that in most of 2016, DCR tokens were worth roughly $0.99 a pop. After several years of fairly steady growth, DCR was trading at nearly $155 at press time. 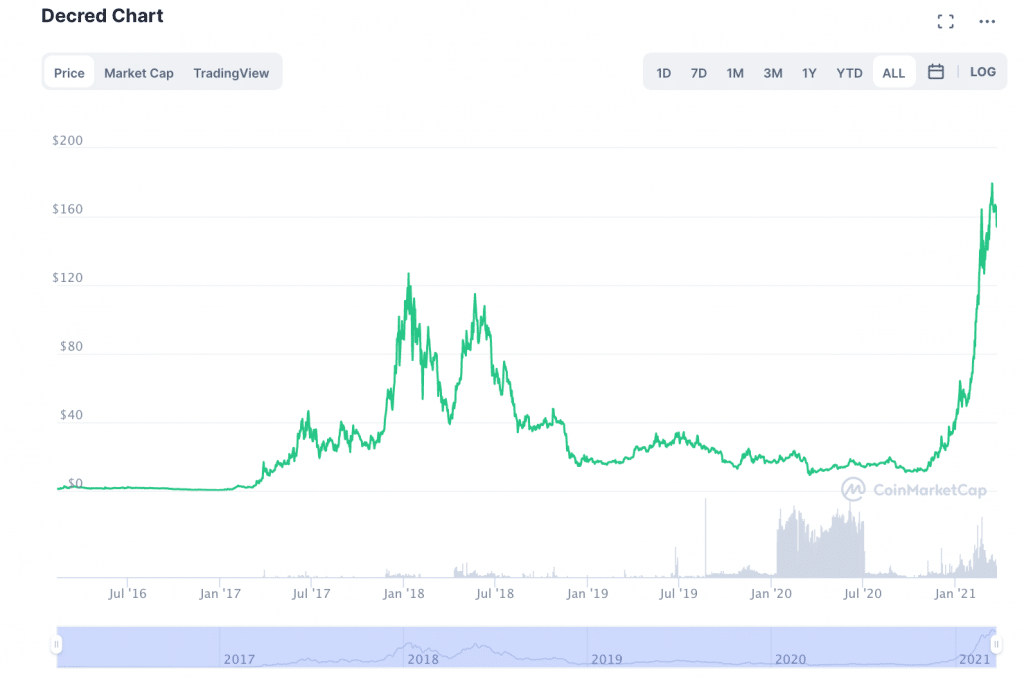 What has Decred’s growth strategy looked like? “In order to keep moving the peg forward, a lot of projects focus on things like marketing and partnerships, sales and positioning,” he said. “Admittedly, we do almost none of that.”

“Instead of the ‘sales and marketing’ side, we focus on the ‘development and milestones’ side; instead of forming a new partnership with Major Corporation X, we add Major Feature Set X.” Some of these features that Decred has added along the way include things like voting on consensus changes and a decentralized treasury, Jake explained.

Who are the users of DCR?

Who’s using the Decred network? Jake explained to Finance Magnates that while the network’s privacy features don’t allow for data collection on DCR users’ personal identities, DCR’s community of contractors could be a good representative sample of what Decred’s user community might look like.

“Our contractors are pretty spread out,” he said. “There’s a chunk of us in the US. Some of us are in Africa, South America, Europe–we’re pretty thin in most of Asia, but we’ve got people from India, and all kinds of places.”

Jake also said that Decred has a major following in Brazil. In fact, Decred’s blockchain was used in Brazil’s November 2020 Municipal elections to timestamp and record political donations. The occasion marked one of the first times that a public blockchain has been used for government functionality.

“We have a couple pieces of open-source software that can effectively be used for free,” Jake said. The first is “a system called Politeia, which is a system for taking cryptographic attestation.” In other words, you can cryptographically verify that “‘I’m Person X, I said Thing Y at TimeZ,’ and you can anchor that information in the Decred blockchain.”

“The piece of software that anchors the information is called ‘dcrtime’”, which a timestamping application that allows users to store hashes of arbitrary data on the Decred blockchain.

How did Decred’s chain catch the attention of the Brazilian government? “There’s been a number of people in Brazil who have been involved with organizations that do municipal election checking,” Jake explained.

These organizations were also working with a legal tech called OriginalMy. OriginalMy is incorporated in Estonia, and operates as a Brazilian blockchain project that provides proof-of-Authenticity, digital signatures, digital certificates, and document authenticity.

Essential, the digital certificates that were created by OriginalMy were anchored in the Decred blockchain. “When people donate money in these municipal elections, the person who received the money can say, ‘I received this money,’ and then effectively notarize it and anchor it in our blockchain.”

“This effectively creates unforgeable historical records for almost zero cost, and without bloating the blockchain at all…this allows people to be confident that there are not shenanigans going on when it comes to donations.”

“There should be more transparency, and it should be harder to cast fake votes.”

Indeed, the power that blockchain may have to curb political corruption and facilitate truly fair elections has been discussed for quite some time. However, there have not been so many examples of blockchain being used in government election procedures.

“What’s interesting about [blockchain] implementation–particularly when it comes to politics–is that one politics are involved, there are always these competing interests,” Jake said. “For example, you’d figure that people want fairer elections in most places in the world–but do they, really?”, he asked–”they” referring to politicians who run for and hold office.

“Look at the gerrymandering in the United States–if officials really wanted a fair vote, they wouldn’t shape their districts like a snake across the state.”

Is it realistic to think that blockchain could be implemented to make elections fairer?

“Hey, I’m a hopeful person,” Jake said. “When it comes to more fairness and more transparency in the context of governance and voting for people…There should be more transparency, and it should be harder to cast fake votes.” Jake added that casting fake votes is “effectively impossible” on the Decred network.

“We’d love to see more of that engineered into the nation-state voting processes around us,” he added. “Now, whether people choose to run the ball there or not is really an open question, based on the competing interests that people have. But I do think that after how heated things got in the United States’ 2020 election cycle, it would be great to see these kinds of things implemented in the US.”

This is an excerpt that has been edited for clarity and length. To hear Finance Magnates’ full interview with Jake Yocom-Piatt, visit us on Soundcloud or Youtube.