In other markets as NY session comes to a close:

him quiet day on the economic front as the week gets off to a start. Existing home sales in the US came in weaker than expected 6.22 million annualize versus 6.5 million estimate.  Inventory it is down -29.5% y/y to record low 1.03m units. The weather in February was also brutal which likely contributed to a decline.  Nevertheless interest rates are moving higher and prices showed a gain of 15.8% year on year which can be a drag going forward.

Fed’s Barking got the Fed Talk going this week by saying that over the next six months we need to ‘look through’ 12 month inflation, and told the market that the Fed will be focused on month-over-month inflation and trimmed mean inflation. On growth, he added retailers are already seeing things ‘flying off the shelves’ because of stimulus cheques, and prospects for the economy are getting stronger.

Fed’s Powell will testify with Treas Sec Yellen tomorrow. There is a full schedule of speakers se for tomorrow:

In the US debt market today, yields declines with the yield curve flattening (the 30 year moved down the most). The 2-10 year spread moved from 157.18 basis points on Friday to 153.65 near the close today.

Lower yields helped to push the Nasdaq shares higher. The S&P and Dow also closed higher but off the highs for the day. The Russell 2000 index meanwhile fell on at -0.90%.

In the Forex market today, the USD started the North American session as the weakest of the majors, but was then outpaced by the falling CAD and GBP currencies. The greenback was still lower but was near unchanged versus the GBP, JPY, CAD, AUD and NZD.  It fell the most mercy EUR and CHF. The CHF was the strongest currency today after cracking back below its 200 and 100 hour moving averages. 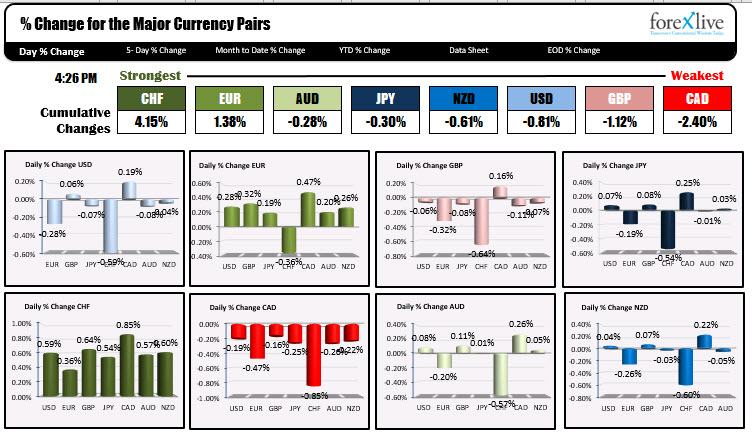 Some technical levels to eye in some of the major currency pairs: